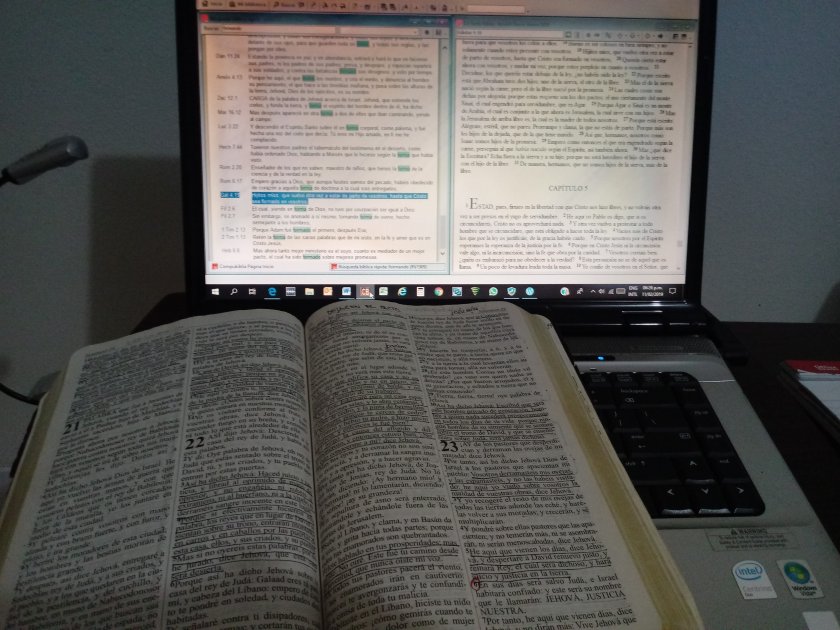 My little children, of whom I travail in birth again until Christ be formed in you, Galatians 4:19

The past few days have been days of confrontation and demand; God has been confronting me about the operating models I have used up to this point to train others in their calling to ministry. The Lord has demanded of me the implementation of more comprehensive teaching platforms so that with what I have been teaching so far, I can instruct and train larger groups of people.

It all began when in several conversations with a pastor friend of mine, I suggested that he develop a ministerial training plan in his church to prepare his young people in the development of their respective calls; I recognize that because of the situations of our societies, not many young people have the option of enrolling in a biblical institution to prepare for ministry.

At the end of the conversations I noticed that the pastor was not convinced enough of what I was saying, and I expressed myself with certain dismay, he is not going to do it! There, at that moment I heard a voice that told me, and why don’t you do it? Time passed, but that question was kept in my mind with a lot of force.

Another day, visiting a Christian bookstore, while looking at the titles of the new books on the shelves, I came across a book whose author, in the review on the back cover, was described as the “itinerant professor” of a Christian educational institution. The expression echoed in my spirit, it was the testimony that God demanded that I develop an itinerant training program to train many people who have received a calling from God, but do not have the resource to be formed in it.

Quite a few years ago we had done something similar. Together with a fellow pastor of the same church association to which we belonged, in Guatemala, we traveled every Friday to a distant town to train workers who, moved by their calling, had begun work in those places; such training took us two full years to complete.

So, understanding what God was demanding of me, I took on the task of preparing and classifying the basic teaching that every competent minister must have in order to implement and develop his call and ministry.

But a third stage of confrontation was still missing. Last week my wife and I accompanied a young man and his mother to receive an orientation on the homeschooling program, and there the vision was completed.

The description of the program, the way in which the student learns while interacting with his/her parents and/or tutors, and above all, that the student does not need to attend a classroom to receive academic instruction, became a whole process of revelation before which I was being exposed, to show me the teaching platform to which God had referred days ago.

In-home ministerial training? Tutorial teaching at the student’s pace with no set time to complete studies? Are we ready for self-taught training? Is this the training modality of late times?

I had many questions, as you may have seen. But as I asked question after question, a single answer reached my spirit.

The problem we currently face, magisterially speaking, is not people who lack knowledge, little or much knowledge is not the reason for ineffective and weak ministries; it is the lack of subjection that most ministries decide to adopt as a personal characteristic. Not allowing oneself to be taught by others, not tolerating the authority of others unless benefits are derived from them, has so far been the major cause of many divisions in churches, and rivalry between pastors even from very small towns.

Why an in-home ministerial training model? How many are able to be trained following a tutor’s instruction?

God was describing to me not only the model for training in distance, but above all, describing to me His Will to bring forth from the scarcity of our Latin American societies a well-concerted army that has learned to trust and submit to its fellow servant.

These who are thus trained will solve the problem of lack of subjection to other ministries, because they will learn from the beginning of their own ministry that their formation, growth, development, and ministerial projection were based precisely on the daily and constant consultation and instruction of their tutor. They will learn about the value of growing under spiritual cover.

We are ready; we have taken the step of faith to begin this stage of in-home ministry training.

This program was originally constituted due to the need for ministerial training in the exercise of spiritual warfare and liberation, a doctrine that although biblical, is not part of the curriculum of studies in the ministerial formation centers of many of our Latin American cities.

The program is designed on the basis of homeschooling, which demands that the student under this mode of learning has a clear commitment to himself, and to God, that his ministerial development depends on the consistency he shows to work alone, in constant consultation with the tutors assigned.

The program does not follow the traditional curriculum of the theological institutions of most of our cities, with courses such as hermeneutics, homiletics, biblical archaeology, etc., subjects that although of recognized academic value, in no way form the character of the minister. On the other hand, not every person with a legitimate calling from God will occupy a pulpit as their final ministerial position; God is rising up men and women with non-traditional ministries with the sole function of establishing spiritual operations to prepare the way for the return of the Lord.

The program focuses on the doctrinal aspect according to the teachings established by Jesus in accordance with the Scriptures of the Law, of the prophetic writings, and of the other Sapiential Scriptures; and it remains faithful to the doctrine established by the apostles, as recorded in the first chapters of the book of Acts of the Apostles.

The student will attain his ministerial formation from his ability to understand the Scriptures, and from his willingness to live by them, understanding that they are revealed so that the man of God may be perfect, fully instructed in every good work.

The program consists of 21 study modules each with specific purposes of its own, so that the student may be formed in all integral areas of an apostolic and prophetic ministry, but with Christological emphasis of liberation as established in the teachings of Jesus. The duration of each module is determined by the student himself, according to the pace of his learning.

The evangelistic task of recent times is not only a proclamatory task, but a liberating task, according to the testimony of the Holy Spirit,

Therefore, God’s calling is built upon spiritual warfare and the revelation of His Word; God’s demand has been, and continues to be, to establish His Kingdom on earth; this is not necessarily achieved by founding new churches.

For we wrestle not against flesh and blood, but against principalities, against powers, against the rulers of the darkness of this world, against spiritual wickedness in high places. Ephesians 6:12

And ye shall know the truth, and the truth shall make you free. John 8:32

The Scriptures establish deliverance as evidence that the Kingdom has been established in the places,

But if I with the finger of God cast out devils, no doubt the kingdom of God is come upon you. Luke 11:20

The program is oriented to form, train and ordain worthy ministries to the evangelistic work with an apostolic and prophetic fundament.

We understand that the Lord is rising in these end times, non-traditional ministries that will work in different places rising up congregations of faith based on biblical principles.

We understand that the Lord is rising up ministries that will make a difference between the religious and the revealed.

Module 3: Doctrine of the foundation of repentance from dead works

Module 4: Doctrine of Faith in God

Module 6: Doctrine of Laying On of Hands

Module 7: Doctrine of the Resurrection of the Dead and the Return of Jesus to Earth

Module 16: How to Reconcile the Cursed Regions with God

Module 18: The Mystery of Iniquity

Till we all come in the unity of the faith, and of the knowledge of the Son of God, unto a perfect man, unto the measure of the stature of the fullness of Christ: Ephesians 4:13