Baptism was not a strange element for those who ‎received it from John the Baptist. The reason why the ‎people did not hesitate to undergo its practice, apparently ‎new, it was because its basic principle is contained in the ‎Law of Moses.‎

Spiritual Warfare against the Powers of Sin

Sin is not only a deviation or inclination towards evil, proper to human nature, but it is also a spiritual argument provoked by Satan to have the right of operation and intervention among the human race. God did not design, nor did he create sin to cohabitate with the man. For two reasons we affirm it and corroborate it with the same Scriptures.

Spiritual warfare is not a new subject, nor is it a human invention. It does not arise from academic theological thought, nor from exegetical doctrines. Satan, the prince of this century, is in constant war activity, and his purpose is to take captive the souls of the generations born under the promise of restoration.

Though most evident in the New Testament, the entire Bible bears witness to the reality of spiritual warfare. The evidence are found in all the books. In the book of Genesis, in the first Words of God addressed to Eve, after the judgment of disobedience has been made concrete, they give direct testimony that the generation of God’s children will be in constant spiritual warfare.

Building our Integrity According to the Bible

Nobody is born being integrous, integrity is cultivated, and it is reached with effort; of course, in the measure of the willingness to expose ourselves before God. Integrity is the openness that the human spirit acquires of allowing the inheritance of sin to be exposed to the light; No one who is unwilling to expose himself before God can be integrous.

Integrity has nothing to do with morality, although of course, there will be those who strive to define it in terms of it. Integrity is a human virtue of a spiritual nature, and therefore, to cultivate it, it is necessary to eradicate all the secular models and morality patterns on which it was intended to be built first.

Integrity is ordered from the personal decision to act according to divine dispositions; it can only be integrous who is willing to honor God through his executions. The basic reason why we cannot be integrous is because very few have decided to have God in their knowledge.

Signs from God to the World 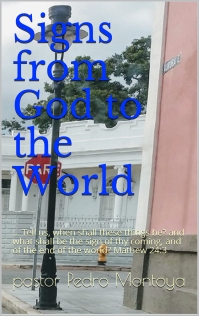 Recently while teaching the Introduction to the New Testament course and discussing how the apostle John presents in his gospel the works of Jesus in exactly seven miracles, which the apostle calls signs, the Lord led me to compare the purpose of the seventh sign the resurrection of Lazarus from the dead with the purpose for our time of two recent events that caught everyone’s attention in 2010. I am referring to the earthquake in Haiti, on January 12th, and the confinement and eventual rescue of the 33 miners in the San José mine, in Chile, on October 13th of that same year.Although the apostle acknowledges that the deeds of Jesus were so many that “if they should be written every one, I suppose that even the world itself could not contain the books that should be written”, he only highlights seven miracles-signs of them.The apostle presents these seven signs as if they were seven great lessons, as in Genesis the seven days of Creation are presented, and he highlights from each of them how God establishes with signs His methodology of operation in the midst of the times. The signs are not chosen at random, they were duly selected as part of a school of the teaching of which His gospel is the textbook.

…and shall call his name JESUS: That you may know the truth of the things in which you have been taught

…and shall call his name Jesus is a book based on the life and work of Jesus according to the writings of Luke’s gospel.

The Gospel according to Luke offers the western reader a more contextualized perspective of the teaching of Jesus of Nazareth; it is a unique vision, different from the Jewish interpretation of the other gospels that present Jesus more as a regional Messiah than as the one God has sent for reconciliation for all humanity. It is a narrative presented by a non-Jew who knows nothing of Jewish culture, in fact, does not have that background, which discovers in Jesus not the man turned into a god, in the Greek way, but God himself manifested in a man to show men how God is in His nature.

Luke presents historical facts of Jesus, not as historical accounts, but as interpretations of a message that His contemporaries could not see or understand about the way back to God. Luke keeps in mind from beginning to end in his writing that the things he writes about are to remember the aspects of faith in which they were taught by those who saw Him from the beginning.

The Preaching of the Cross 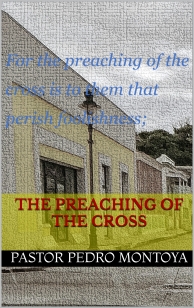 The Preaching of the Cross is a pastoral study material based on the text of chapter six of the Epistle to the Hebrews. The writer exposes in his dialogue with the recipients of the epistle the content of the doctrinal themes that they received from the beginning of their conversion, and by the way that the writer exposes them in relation to their spiritual growth and maturity, we note that these doctrinal themes were in their time the doctrinal ensemble of what eventually became known as the doctrine of the apostles.

The doctrinal themes that formed part of the doctrine of the apostles, as recounted in the Epistle to the Hebrews, are the following:

Evangelization and Spiritual Warfare Strategies for the Establishment of Faith Communities

The case Jesus presented about the unclean spirit seeking rest after leaving a person shows us, first, that it is not the uninhabited places that demons seek, that demons choose to live in the same urban settlements established by man; and, second, it shows us that demonic forces depend on “man” to exercise their dominion over the earth; or rather, they depend on the facts of this one, or these, to operate with right over the region.

The demonic Powers and Principalities stationed in an inhabited region never operate in independence of the people who live in them, it is the facts of their inhabitants who summon them, concert with them and make them settle in their region. Based on this fact, the only way to distort the power of the spiritual forces of the place is to invalidate the works of those who gave them the right to settle in the place.

It would seem that we are entering a course of spiritual warfare and liberation; Evangelization is no different than spiritual warfare, in fact, Jesus presented the one as a consequence of the other: if I with the finger of God cast out devils, no doubt the kingdom of God is come upon you (Luke 11:20). This is the reason why the Gospel has not been able to enter seemingly atheistic and/or pagan areas.

The book is a Training and Instruction manual on how to establish the Gospel message in regions that have been closed to the Kingdom of God. We invite you to read it.

One thought on “Published Books”